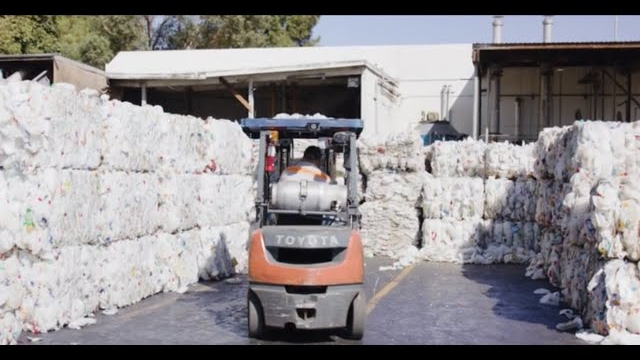 Step 1. Your family consumes all of the milk. You rinse the bottle, replace the cap, and place it in the recycling bin along with other recyclables.

Do milk containers get recycled?

– Pros: Because plastic jugs are composed of a single substance, they may be recycled. Plastic jugs are the lightest of the three most prevalent types of containers. By weight, a plastic jug contains 96% product and 4% container on average. This indicates they have the lowest transportation-related greenhouse gas emissions.

How are plastic milk jugs repurposed? 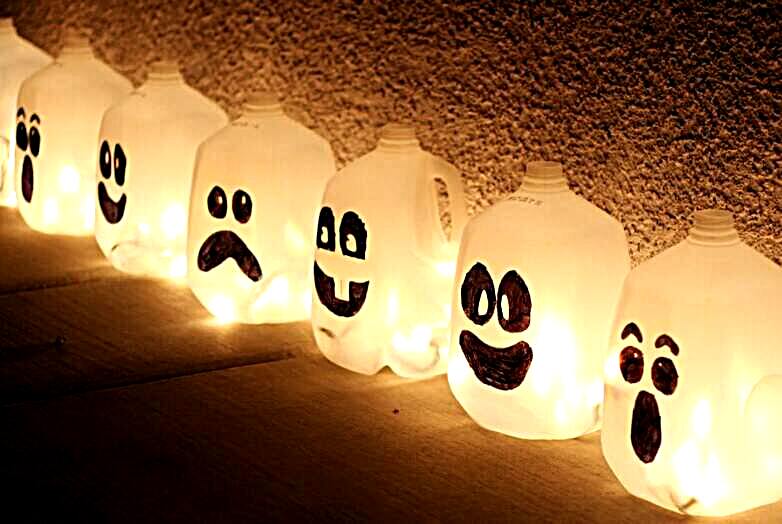 Each year, millions of plastic milk jugs are discarded. The majority of plastic milk containers are composed of high-density polyethylene, commonly referred to as HDPE or No.2 plastic. This implies that most curbside recycling programs accept milk jugs for recycling.

Plastic milk bottles are often transformed into recycling containers, pens, timber, picnic tables, fences, benches, detergent bottles, toothbrushes, and children’s toys when they are reclaimed. According to an Environmental Protection Agency analysis, however, only 28.9% of these plastic bottles are recycled.

The remaining 71.1% may decompose in landfills for at least 500 years. We cannot allow it to occur! Recycling your milk jugs is an excellent option, but reusing them is superior. There are several inventive methods to repurpose plastic milk bottles in daily life. Check out the 20 inventive methods to repurpose milk jugs made of plastic: Image provided by Urban Gardens.

At Home and in the Garden 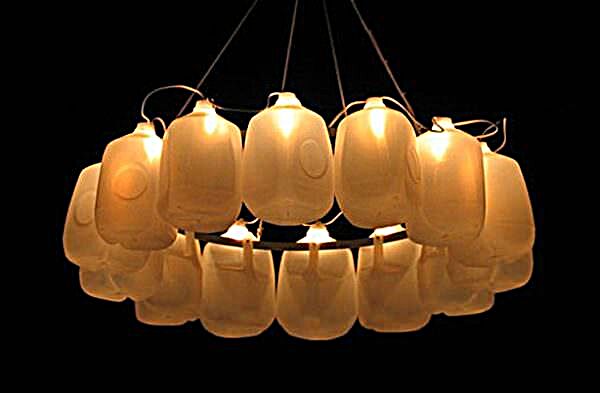 One of the better applications is reusing plastic milk jugs in the house. You may create a Sewing Room Fabric Scrap Storage System or a Sandwich or Snack Container using them at home. You may use them in your landscape to create Wall Planters, a Watering Jug, or a Milk Jug Birdfeeder.

Check out these Milk Jug Flower Lights, this Outdoor Chandelier, and this Rose Solar Light if you want more illumination. Kids’ Projects Children enjoy upcycling crafts! With plastic milk jugs, children may create a multitude of different projects. Take it outside and help them build Milk Jug Bubble Wands or Milk Jug Flowers.

Use a Milk Jug Igloo or these Fairy Houses and Doll Fairy Wings to inspire their imagination. Teach kids how to save money with this Pig-gy Bank or help them beautify their home with this Milk Jug Decorative Window Craft. Image provided by Eighteen25. Crafts Made Throughout the Various Seasons The holidays are an excellent opportunity to be creative using plastic milk bottles. 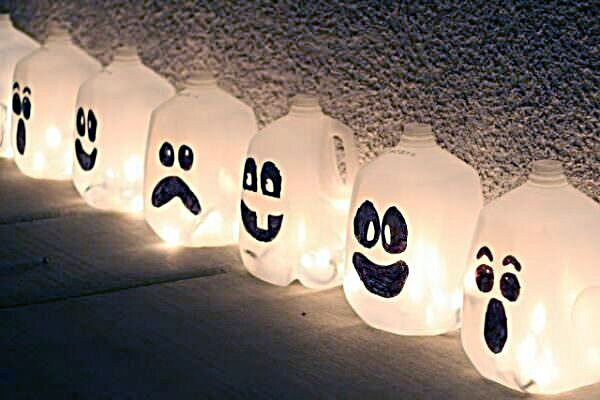 If your water is from a public water supply or has been disinfected, you can keep it in clean soda bottles or milk jugs with screw-on lids.

Are milk bottles made of white plastic recyclable?

Did you realize that milk bottles are being filled? A cow may produce as much as 30 liters of milk each day, which is equivalent to sixty 1-pint milk bottles. No matter who created or filled the bottles, until recently all milk bottles had the same natural color, regardless of who made or filled them.

See also:  Where Can I Recycle Amazon Envelopes?

Can one-gallon water bottles be recycled?

Understanding the little impact of plastic water bottles on the environment | Opinion People frequently assert that too much plastic exists in the environment. But when they make such assertions, are they actually aware of the facts? They frequently cast accusing fingers at popular items packed in plastic.

Individual 16.9-ounce (half-liter) plastic water bottles are often constructed from polyethylene terephthalate (PET), which has the recycling symbol No.1. This plastic kind is the most recycled plastic in the world. High-density polyethylene (HDPE), which is used to create one- and two-and-a-half-gallon jugs and carries the recycling symbol number two, is another extensively used plastic for food and beverage containers.

Importantly, despite the fact that bottled water consumption continues to rise, the total quantity of plastic used in these goods has dropped due to the lightweighting of plastic bottled water containers and a shift away from soda and fruit drinks toward water.

Due to their carbonation and/or bottling procedures, soft drink and other sugary beverage packaging need thicker plastic than water packaging. This move accounts for an astonishing 66 percent of the increase in bottled water sales from 2006 to 2019. And as a result, 73 million pounds of PET plastic resin were saved just in the last year due to the rising popularity of water over soda and fruit beverages.

This is an essential issue considering the growing obesity and diabetes rates in our country. Therefore, when consumers choose bottled water over sugary beverages, they are not only doing something beneficial for their health, but they are also doing something beneficial for the environment by selecting a beverage wrapped in less plastic, thereby minimizing their own environmental footprint.

This implies that the plastic may be reused to create new beverage bottles and other items. This differentiates bottled water from other typical plastic products that are really “single-use,” such as non-recyclable plastic items (such as straws, cutlery, and plates), food and goods packaging (such as film, heat-sealed and multi-layered laminate bags), and containers (e.g., non-PET, HDPE and PC bottles and tubs).

Items made of single-use plastic that lack a recycling mark are not recyclable. However, one-, two-, two-and-a-half-, three-, and five-gallon single-serve water bottles and bigger bottles, such as one-, two-and-a-half-, three-, and five-gallon bottles, are all 100 percent recyclable In addition, customers perceive PET plastic water bottle containers as recyclable the most, which is likely why they are the most recycled containers in U.S.

Curbside recycling programs. This is a significant distinction. Empty water bottle containers (including the caps) must always be deposited in a recycling bin. By collecting these bottles and repurposing the plastic to create new containers from old ones, the market requires less virgin plastic. This notion contributes to what constitutes a circular economy: reducing waste and maximizing existing resources.

Do not squander a valuable asset. PET plastic is an important resource due to its ability to be recycled and reused repeatedly. However, this is not true for all polymers. Many types cannot be recycled (e.g., kitchen plastic wrap, the exterior packaging of the majority of consumer goods, grocery bags, squeezable food containers, garment bags, snack food bags, and plastic cups, straws, and utensils, as well as the majority of takeout containers), resulting in a much greater environmental impact.

There is, of course, a set of high-value plastics that humanity can’t live without: plastics used for life-saving medical equipment, gadgets, and food packaging, including bottled water. So, what can individuals do to lessen the environmental effect of plastic? Shop carefully. Purchase items that are packed in containers and packaging that are 100 percent recyclable.

Purchase things made from recyclable materials. Make a commitment to always recycling all plastic food and beverage containers. Share your commitment with your friends and invite them to join you. Use these social media hashtags to spread the word: #EndPlasticPollution #BuyRecyclablePackaging #AlwaysRecycle Vice president of communications for the International Bottled Water Association is Jill Culora.

Can milk jugs be crushed for recycling?

Why are containers for “ready-to-drink” milk and plant-based beverages being included to the Return-It program? This is the outcome of a revision to the Recycling Regulation of the British Columbia government, enacted under the CleanBC Plastic Action Plan.

As an industry-owned, non-profit stewardship organization, we manage the Return-It beverage container system in British Columbia. What types and sizes of containers for milk and plant-based beverages would you accept? All “ready-to-drink” milk and plant-based beverage containers of various sizes purchased on or after February 1, 2022 will be accepted at Return-It collection stations.

As there was no deposit charged at the time of purchase, these containers are not eligible for a deposit refund, but they can be recycled at Return-It depots that also accept packaging and paper or in your curbside bluebox/building recycling bins as they are part of the RecycleBC program. When will these changes take effect? On February 1, 2022, a 10-cent deposit will be required on all “ready-to-drink” milk and plant-based beverage containers, regardless of size.

The 10-cent deposit will be repaid when the empty containers are returned for recycling. Why is this transformation occurring now? This is the outcome of a regulation change adopted by the British Columbia government under the CleanBC Plastic Action Plan.

If containers were purchased before February 1, would consumers be allowed to return them on that date? No, only containers acquired on or after February 1, 2022 are eligible for deposit refunds. Can customers return milk cartons to retail establishments for a refund? While shops will accept a limited number of milk and plant-based beverage containers, the best choice for customers is to return these containers to one of the province’s more than 170 Return-It locations to get their deposit.

Only clean containers will be accepted for returns; thus, consumers are recommended to rinse off containers prior to returning them. In addition, we encourage that consumers clarify with their local retail store the types and amount of containers they are permitted to accept. Can I crush or flatten plant-based milk and beverage containers? It is preferable that containers not be crushed or flattened.

The depots examine the label, barcode, and other identifying markings to confirm that the vehicle was purchased in British Columbia; this assures that the deposit was paid and may be repaid. If the containers are crushed or flattened, they may not be able to authenticate them and will thus be unable to return the deposit.

What is a down payment? Deposits are required when purchasing a beverage container. They are repaid in full when the empty container is returned for recycling. These deposits are determined by government statute. Refer to the government of British Columbia’s page on Beverage Container Regulation. Visit return-it.ca/beverage/products for a complete list of containers that can be returned to a Return-It location.

Why do individuals place milk jugs in the garden?

Some people arrange water-filled milk jugs around their flower beds to prevent cats. According to the City of Marion in South Australia, the light that reflects from the water in the jugs will discourage cats. Some people claim that cats are repelled by non-drinking water.